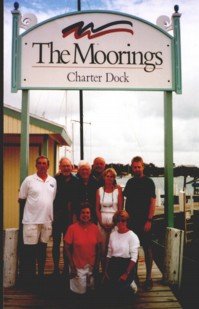 The Indianapolis Cruising Club was formed in 1958 as part of the Indianapolis Sailing Club to promote interest in cruising trips around the world. The trips help train people to navigate and handle the problems associated with larger sailboats and help them eventually qualify as Charter Skippers and crew. There is a plaque displaying the geographical locations of trips and past Commodores located in the ISC clubhouse. The Cruising Club has traditionally planned one trip each year.

The Cruising Club trip for 2001 was a one week charter out of Marsh Harbor (Abacos) in the Bahamas. There were two Beneteau 42ft boats skippered by Bill Whalen and Guy Konkle. The 2002 plans were to go to the Greek Islands. These plans were dropped due to world problems in the area and a new trip has been planned for the North Channel (Gore Bay) area of Canada. The trip is a one week charter August 3-9, 2002.

These trips are open to trailering club members and we encourage club members to suggest areas to sail which are within trailering distance. If there is interest in closer destinations and combined trips of chartering and trailering, we would welcome your ideas.

Join the Cruising Club for only $5!